I write jokes. I try jokes. I tweak jokes. Usually they get better. I had a blast January 9th when my good buddy Sunee Dhaliwal invited me to feature before his killer headlining set at the newly opened Yuk Yuks in Abbotsford BC. Read and listen to my "KIDS ARE RACIST" bits below:

KIDS are racist.  And I blame Dora the Explorer.  Dora the Explorer is making kids racist.  Because now whenever they see any brown person talking, they just assume it’s Spanish. And we even used to ive in an Indo-Canadian neighborhood. So when the nice Punjabi lady was like, “Saat Sri Akaal, hello”

My daughter replied with “OLA, VAMANOS & SWIPER NO SWIPING.”

Then we are watching Hockey and she asks, “Is that guy speaking Spanish?”

“Hey dad, in India THIS (pinky finger) is a swear.”

“In India, THIS (pinky finger) means THIS (middle finger)”.

Who taught you THIS?

“Puneet.  She knows cause she is from India… or maybe it was China”.

“Dad, did you know that all Indians can't wink?"

OK, so now, who do you actually know that can’t wink?

Uhm, I thought Puneet was Chinese? 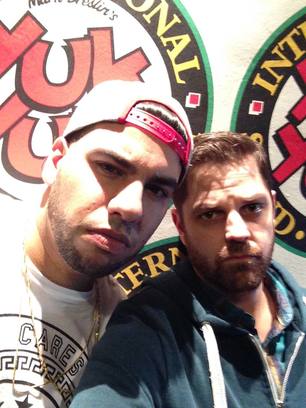