Most of you have never heard of the Buddy Guys. Re-Cap: we pitched a show to the CBC/ComedyCoup and it crushed! (but it did not crush enough to win all the beans.)

Ever since the glory days of working as a crew, Cassiar Mediaworks, Sunee Dhaliwal and I have longed to 'make something happen'... but who would pay for our desire to play.

Abbotsford is GROWING and we wanted to tell newcomers that we are getting ready for them, all the while reminding current citizens that what we have is already great and it's just gonna get better. Abbotsford is moving forward and investors and business owners and home buyers and families and new immigrants should jump on this bicycle built for YOU (Too much cheese? Even so, we have the wineries to match).

Needless to say, our project took off (well, maybe we did need to say it, because who could have known). 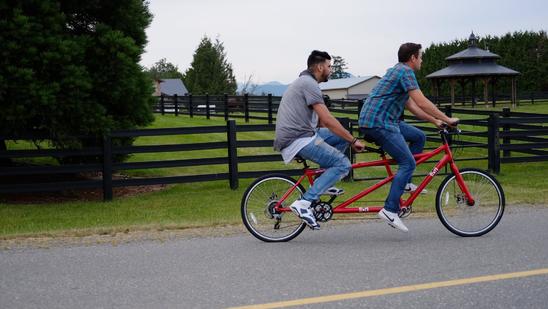 I write jokes. I try jokes. I tweak jokes. Usually they get better. I had a blast January 9th when my good buddy Sunee Dhaliwal invited me to feature before his killer headlining set at the newly opened Yuk Yuks in Abbotsford BC. Read and listen to my "KIDS ARE RACIST" bits below:

My point now is that I lived somewhere and had no idea who I was sharing that space with.  Who were these people?  I wanted to know.  My desire was further spurred to action when I received the call from my wife "Uhm... there are men with turbans and swords walking down the street." Apparently these same, but different, guys had put on some fancier PJ's and were marching in a parade to celebrate their faith and honour their culture.  What was their culture and what do they believe to be true about life and love and God?

Thus began my slow journey to move from ignorant to not-as-ignorant.  These people were from the Punjab in India. They spoke Punjabi. Most practiced Sikhism.

I am not just another funny face... I thinks deep about stuff.  This blog will be about comedy, faith, leadership, family, parenting, diversity and other things that get my noodle cooking.  The hope is that the content will entertain & inspire each of us to ... now I am just babbling.  Read it.  Or don't.