On October 28th 2016 I was heading West on Hiway 1 in Abbotsford BC to have lunch with a friend. I was just past the McCallum Rd Exit when a pick up truck swerved into my lane. I avoided the collision by pulling onto the shoulder and accelerating past the danger and as I attempted to pull back into my lane I overcorrected. It's hard to know exactly what happened because as they say, "It all happened so fast". Long story short is that I believe I had almost gotten back on track when I was tagged on my back end twisting me directly towards the concrete median and BOOM, I became the most amazing stunt driver that never was filmed. "End over end" is what I was told by the first responders who were surprised to find me in one piece. For some stupid reason I couldn't get this photo upright, but I suppose it is fitting. 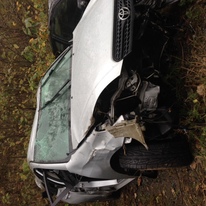 From my inverted dangling position I unclipped my seat belt. Figured I should get out of the car, right? Turns out medical professionals recommend you to NOT unbuckle your seatbelt after an accident. I had no breaks and no blood, but I did have a few lumps on my head from landing on it. Again, DO NOT UNCLIP YOUR SEATBELT.  My wife, Sharalee, has encouraged me to put together 'to do' and 'not to do' lists for after an accident. It's terribly frustrating to not know what you need to do - they taught me NONE of this in my 1993 rendition of Driver's Ed! The seatbelt tip will most definitely be on my list.

As I lay there on my back on the ceiling of my car I had so many thoughts racing through my head. Overwhelmed by disbelief & relief, I really wanted to thank Jesus for the miraculous survival, but all I could muster up was a slow drawn out "Fuuuu%@!"

There is a lot to this story, most of which I don't have the time or memory to type out.  A couple highlights include the guy who came to my aid to support my neck until the paramedics arrived. He was a Chilliwack firefighter and also the dude who swerved into my lane. He apologized and made sure my brain was awake and kept me still and calm and was super nice, but to this day he has still not accepted responsibility for his role in the accident. Ugh. There were also the firefighters who came to extract me from the vehicle. A young hunky dude shielding me from glass breaking as they jaws-of-life-d the door off my car. When I told the X-Ray techs at the hospital that I had a firefighter drip sweat all over me as others cut off my clothes, they thought it was much sexier than it really was. I may have mislead them for effect. So many details. So surreal. My only regret was as they carried me on the spine board towards the ambulance, knowing that traffic was inching past with all eyes on me, that I didn't raise my arm with a massive Thumbs Up. Pretty sure the image would have gone viral. Next time.

In short, what doesn't kill you... doesn't kill you. In other words, we are not in control of our circumstances. One minute, you have hopes for a burger at a new restaurant and the next moment you are taking a selfie in your crumpled Toyota Matrix. Life happens and a lot of the time it sucks, but if you are one of the lucky ones who still gets to breathe at the end of the day, please do the most with that breath.

November 2016 and December 2016 have officially been the busiest working months of my comedy career. I took the stage 25 times (+ filmed 5 fun videos you should watch). Unfortunately, I did so in pain. BUT, thankfully the number of gigs provided the necessary funds to pay so many additional bills (including root canal 'n crown discovered when repairing a chipped tooth from my flying car adventure - BOO!). All in all, this season has brought perspective. Physical pain and a deep sense of mortality also gifted me with the mindset to enjoy my opportunities and serve my clients and audiences to the best of my ability. I believe humility and realistic expectations and gratitude are closely connected. Yes, we are not in control of our circumstances, but we are certainly in control of what we do in light of them. I am thankful to be alive.

If you care to join me on Thursday January 26 at Regent College, I am giving a lecture... an interactive and sometimes hilarious lecture that intends to spur us all to deeper and more intentional living in spite of our circumstances. This is one of the ways I am trying to make the most of my breaths. I hope you will join me.  It's called the Power of Looking Stupid. 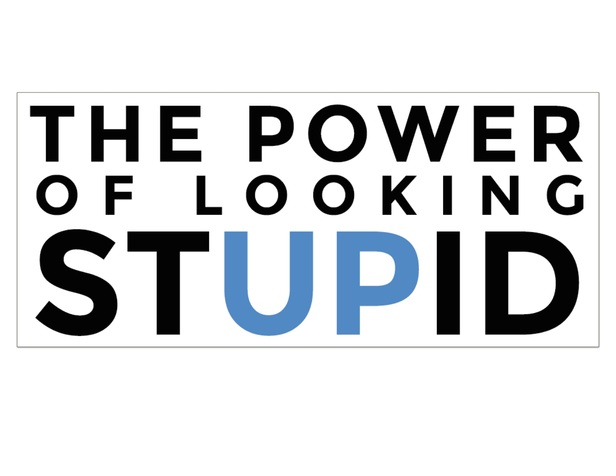