40 is Funny: Funeral and Fundraiser

My dear friend, Scott Campbell, and I share a birth year, wedding year, several years of touring comedy, and we also share a weird sense of humour. Scott's B-Day is in April and I don't officially turn 40 until November 2nd, BUT, we had a party on June 22 nonetheless. In honour of our history and bond we wanted to celebrate our lives by throwing an epic party & comedy show that could not be done any other way than as a funeral. 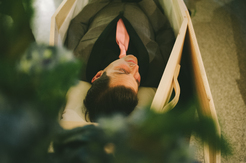 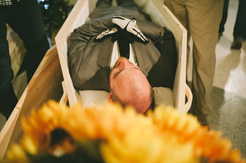 ^^ There was a live wake (beautiful English style pine caskets built and lent to us by a 'please don't say our name' casket making company who were so excited to share because they love comedy and no one ever asks them for anything),

^^ a love song to honour our wives who have endured nearly 17 years of our maleness to the tune of "My Heart Will Go On" by the Queen of Canada, Celine Dion, 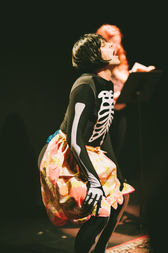 ^^ kid-taught life lessons framed by Cats in the Cradle by Harry Chapin,

^^ an exegetical homily from the IR-REVEREND Johannes Van Diesel,

^^ prostate poetry (note the felt prostate pinned to Scotty's body),
AND we even gave 'beyond the grave' advice (though images were much to terrifying to share here).
BUT beyond all of our frivolity and unorthodoxy we had a point and a cause. Whilst mocking death and our own brevity we wanted to celebrate life and offer new life to a family to whom death was no laughing matter.
The Basil family of six are Chaldean Christians. They struggled for years in Iraq without adequate food, water and basic supplies. Their city or Mosul was in constant chaos. The family was caught between advancing ISIS forces and retreating Kurdish military.
One summer night in 2014, they were woken by military officers. ISIS was just meters away and they were beheading Christians. The family had no time to pack. They left with just the clothes on their back. The parents and their four children were escorted out of the country to Jordan. Here they have been living in squalor, waiting to emigrate. After filling out 114 pages of documents, trying to find honest people to photocopy and digitalize them, sending them to Canada (MCC) for more processing, and then to the Canadian Embassy – the family has finally been given “file numbers” by the Canadian Government. An Arabic speaking friend living in Langley, BC called them at 3:00 in the morning to tell them the good news. Everyone was crying and laughing: “Now we know we will go to Canada. Now we have hope” they said.

Our goal was to raise $3500 to support this family through MCC's sponsorship programs. We accepted donations in exchange for seats to our 'show' in lieu of ticket sales. We had generous sponsorship from FUSE POWER WASHING and an anonymous casket making company and a last minute improv show for FRASER ACADEMY staff that enabled us to fund most of our show to assure our attendees that 100% of their donations went to the Basil family. We sit just shy of our $3500 goal and though there is no more fun funeral comedy show party, invite you to jump in on the gift of life for the Basil family.  Please donate by following this link.

Thanks so much to everyone who helped make our funeral comedy show party a success.