My kids are learning wrestling. One of the parents in our school was a near Olympic wrestler and he uses his passion for the sport to teach kids. Pretty cool. Our kids - all 3 of them - told us - OUT LOUD - that they wanted to try. Super cool. The kids come home jacked after practise to scrap. Not as cool.

One of the big things that I noticed about how they engage each other is that they are often flat footed and swiping to grab their opponent. When theydo that, they are off balance and vulnerable, which makes it way easier for me to knock them down and elbow drop them... wait, what? To have success they are being coached to push into and through their opponent. It's called shooting. "Jo, shoot your sister!" When they do that, they are able to fully reach the challenger and apply their full force into a slick take-down move. Will they receive push-back? Absolutely! BUT, now they have a grip and with feet pumping, they can control the movement... at least that's the idea. 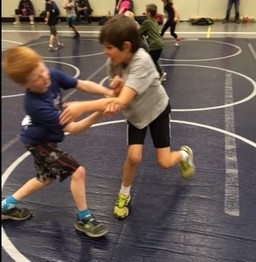 Here's my process: I sit quietly and think/pray about what I want/need to do. Maybe it's a gig I hope to get or a gap in my calendar I should try to fill. Maybe it's a big idea like a kids book or taped comedy special (consider yourself warned). Maybe it's a relationship I hope to nurture... just because. No matter what it is is, I write it down and then I take action; send an email, text, phone call and get the process going. I shoot towards the goal

I am so thankful.

Do you know what you want? Have you written it down? Have you told anyone - OUT LOUD? Have you taken action? This isn't about making a resolution, it's about doing something.

As I looked ahead and now actually standing in 2017, I have been asking myself what should I be shooting for now? Answer: I want to use my voice and my experience to motivate and challenge people in their creativity, relationships and faith and remind them that they are not alone in their struggle. Specifically... check out The Power of Looking Stupid. The idea birthed from reading The Power of Starting Something Stupid and with permission from it's Best Selling Author, Richie Norton, I crafted an interactive, entertaining, and motivational presentation capturing both of our hearts to inspire personal growth and exploration in the face of fear. It's not about the success of the end goal per se, rather the knowledge that you didn't chicken out. It's not about money, rather it's about peace. At the end of the day, if you have done all that you could while not compromising the most important things, success is a bonus. If you know and live out your value, you have already succeeded.