My point now is that I lived somewhere and had no idea who I was sharing that space with.  Who were these people?  I wanted to know.  My desire was further spurred to action when I received the call from my wife "Uhm... there are men with turbans and swords walking down the street." Apparently these same, but different, guys had put on some fancier PJ's and were marching in a parade to celebrate their faith and honour their culture.  What was their culture and what do they believe to be true about life and love and God?

Thus began my slow journey to move from ignorant to not-as-ignorant.  These people were from the Punjab in India. They spoke Punjabi. Most practiced Sikhism.

Two (different) Comedy Shows on May 2: 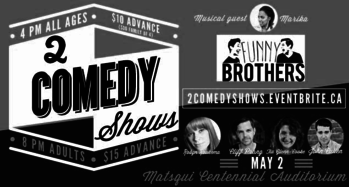 Location: Matsqui Centennial Auditorium, Abbotsford, BC. Tickets can be purchased at Spruce Collective or at www.2comedyshows.eventbrite.ca

My mom named me Clifford.

My mom named me Clifford.  Audiences laugh when I tell them that my name is Clifford.  Kind of cruel.  I get it, though.  Clifford the Big Red Dog.   Cliff Hanger.  Cliff Clavin from Cheers.  "Hey, Cliff, drop over some time!" is a favourite at the senior centre.

I am not just another funny face... I thinks deep about stuff.  This blog will be about comedy, faith, leadership, family, parenting, diversity and other things that get my noodle cooking.  The hope is that the content will entertain & inspire each of us to ... now I am just babbling.  Read it.  Or don't.